Let me first welcome the new Permanent Representative of Yemen to this Council and wish him success in his new function.

Mr. President, we thank Martin Griffiths and Mark Lowcock for their strong briefings. They presented us with a message of hope, but also one of continued, extreme human suffering on the ground. That human suffering should strengthen our resolve to take action in this Council.

The agreement between the parties, particularly on a cessation of hostilities across Hodeidah governorate is an important sparkle of hope for the people of Yemen. Yet the threat of famine in Yemen remains unchanged, as Mark just indicated. This means the need for urgent action from all of us persists: to support of what has been achieved in Sweden, but also to address urgent humanitarian concerns on the ground.

In that context, Mr. President, I will focus on three issues:

Mr. President, we welcome the constructive participation of the parties involved in the consultations in Sweden. We commend the efforts of Special Envoy Martin Griffiths in bringing this about, as well as the unwavering support and involvement of the Secretary-General.

We thank our Swedish colleagues for successfully hosting and facilitating these consultations, as well as the many other countries who contributed to making these talks happen, including Oman and Kuwait.

The cessation of hostilities throughout Hodeidah governorate is a much needed concrete result. When implemented, this will greatly benefit the ongoing humanitarian efforts. We also welcome progress regarding the exchange of prisoners and the humanitarian corridors into Taizz.

The issues about which no agreement was reached, as indicated by Mr. Griffiths, should be addressed as soon as possible.

Let me touch upon on particular issue of concern to us. The lack of women in the delegations in the consultations was regrettable, particularly after the clear calls made by the international community and by this Council to address this ahead of the consultations. The fact that it is the men who are fighting should not exclude women from contributing to the peace. There can only be a sustainable peaceful solution when women are at the negotiation table. And I fully agree with the statement of our Swedish colleague to that effect, just now.

Mr. President, the parties now need to capitalize on what they have achieved, put their words into action and create a conducive environment for talks to resume in January.

More work needs to be done regarding the reopening of Sana’a airport, measures to address the economy and above all else: a framework for a sustainable peaceful political solution with the involvement of women.

2. The threat of famine

Mr. President, this brings me to my second point: the persistent threat of famine in Yemen. Regardless of positive developments in Sweden, the humanitarian crisis remains as alarming as it was two weeks ago. OCHA’s 5 asks to the parties and the international community remain as pertinent as ever.

Already, tens of thousands innocent Yemeni’s have died from completely avoidable causes. And these staggering numbers will rise exponentially if the cessation of hostilities in Hodeidah does not hold. We have reached a point at which each delay is inexcusable.

We need concrete follow-up by the international community. First of all, we support the further involvement of the UN system in the implementation of the agreements. We commend the tasking from Patrick Cammaert in the implementation of the agreements, as just announced by Mr. Griffiths. We express our full confidence in him, he is the right person for the job.

Furthermore, as Mr. Lowcock has said, humanitarian funding is crucial. So we thank Switzerland and Sweden for organizing a pledging conference in February.

In conclusion, Mr. President, in spite of the positive developments, we remain extremely concerned about the millions of Yemeni people on the brink of starvation.

It is the responsibility of this Council to support the Special Envoy’s efforts as well as to urgently address the humanitarian crisis. This Council has a huge responsibility to help end the suffering of the people in Yemen as soon as possible.

And let me end with a quote of Mark Lowcock:

“This war has to stop now.” 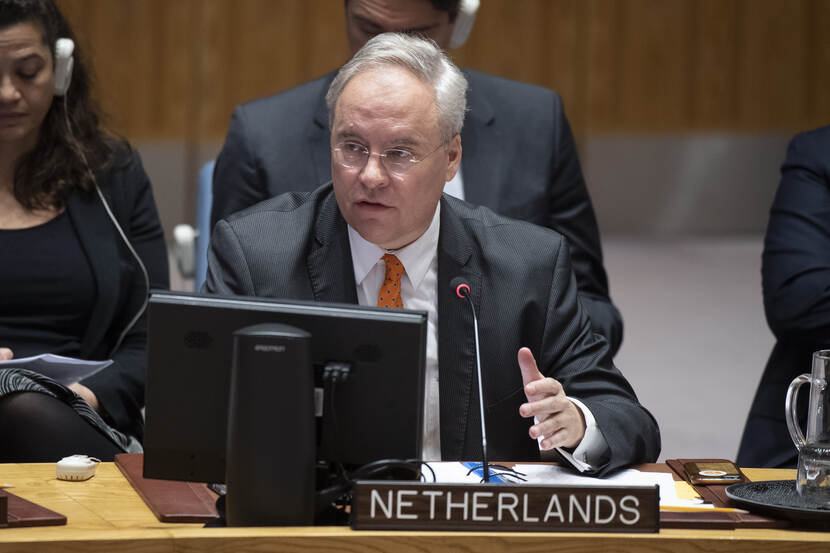