Minister of Foreign Affairs of the Kingdom of the Netherlands 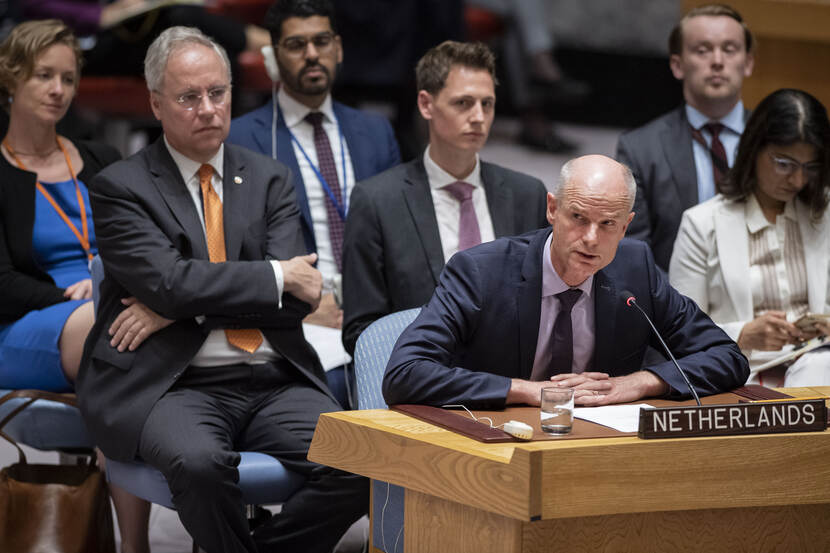 It should be self-evident: a government’s first duty is to protect its citizens. And the first duty for the governments united in this grand Council is to protect civilians under threat. From war, violence and suffering. After all, if we are not here to protect people, what are we doing?

I would like to thank Indonesia for putting this important theme at the centre of today’s discussion. And I’d like to thank you, Madam President, personally for inviting me here. I’m also grateful for the informative briefings by Mr Maurer and by Mr Borello. And by the Secretary-General – for whom improving peacekeeping operations is rightly a priority.

Twenty years ago, in this very hall, my country joined those voting in favour of Resolution 1265. Then, as now, it was our conviction that in conflict, civilians must be protected.

The Council made a promise. It expressed “its willingness to respond to situations of armed conflict, where civilians are being targeted or humanitarian assistance to civilians is obstructed”.

Indeed this shows that this Council is guided by civilians as its ratio for action.

Since the adoption of resolution 1265, a lot has happened. We’ve seen a paradigm shift in our thinking: a mission with civilian protection in its mandate is now the norm. The 18 Kigali Principles were established. They aim to improve the protection of civilians in armed conflict. As endorser, we join the Secretary-General in its call for more signatories.

Last year, with South Sudan and Yemen in mind, we added the issue of conflict and hunger to outlaw the use of starvation as a tool of war. Our aim is to root out the crime of starving civilians by banning it and punishing perpetrators. The protection of women against sexual violence also became an important theme.

Yet, as we are gathered here to commemorate 20 years of our efforts to protect civilians, we have to be frank enough to ask ourselves inconvenient questions. Is there a real reason to celebrate?

Translating lofty words and good intentions to day-to-day realities in highly complex conflict environments is not easy. If civilians expect to be protected by incoming missions, and they are not, this leads to frustration. To a loss of credibility. It undermines the legitimacy of peacekeeping missions, of the UN and of this Council. And in the end to preventable human suffering. And that’s the last thing we want.

Civilian protection is not some last-minute add-on to peacekeeping. It should be a core goal of each mandate. It has to be funded, and part of the standard operating procedures of the Force. We should support this, also in discussions in the Fifth Committee.

The Council, already in 1999, emphasized the responsibility of States to end impunity and to prosecute those responsible for genocide, crimes against humanity and serious violations of international humanitarian law.

This brings me to this vital point: the importance of accountability.

I have said it before, in this very hall: violations of international humanitarian law and human rights law should not go unchallenged. Humanitarian law is not optional, not ‘nice to have’. It’s the bedrock of what defines our humanity; upholding this law is crucial to all of our credibility. Violations should be subject to independent investigations, mandated by the international community.

Yes, perpetrators should be afraid. Aware that they will be called to account. They should be lying awake at night, in the knowledge that one day, they will face justice.

Today, I want to focus on the horrible crimes committed by ISIS. Their sheer number and their gravity. We all know the images and the facts.

We should all work to ensure that perpetrators of these heinous crimes be brought to justice. Enable the Security Council to state the facts clearly: that ISIS committed genocide against the Yezidi.

After fact finding, evidence gathering, investigation, and attribution, prosecution is the final, and most important link in the accountability chain. Without this final link, justice is not served.

ISIS perpetrators of mass atrocity crimes should be prosecuted. Preferably in the region. If feasible, under the jurisdiction of an Ad hoc or Hybrid International Criminal Tribunal.

I am fully aware of the complex obstacles on our road towards this goal. But we have to keep in mind: justice is a prerequisite of lasting peace and security. We must join forces, and take it step by step.

The Netherlands will do all in its power to help us reach that goal. To bring us closer, at the opening of the next General Assembly in September, the Netherlands will initiate a ministerial meeting on prosecution of ISIS fighters. Today, I invite Security Council members and others to join us on this road towards justice.

We owe it to the victims.