Let me first join others in offering condolences for the victims of the terrible airplane crash in Indonesia.

Let me thank Mr Lowcock for his sobering briefing. Let me also thank the humanitarian workers in Syria for their tireless efforts to improve the lives of those in need. These colleagues from the UN as well as from international and local NGO’s, including the White Helmets, deserve our deep respect, our gratitude and our support.

Mr. President, I will focus on the following three points:

Mr. President, my first point: access. Humanitarian needs remain high throughout the country, after nearly 8 years of continuous warfare. We are deeply concerned about the lack of access within Syria, even to areas now in the hands of the Syrian regime.

The Syrian regime does not allow inter-agency convoys to reach those most in need. It has not done so since August 16. Several areas to which access is being denied used to be in the hands of the Syrian opposition.

It is unacceptable that civilians continue to be collectively punished by the regime for living in former opposition-held areas. The Syrian government should not be allowed to continue interfering in the delivery of lifesaving aid.

We cannot accept a situation in which so-called “hard-to-reach areas” are only hard-to-reach because of artificial barriers imposed by the Syrian regime. It has a responsibility towards all of its citizens.

The Syrian regime must guarantee access for objective needs assessments and for the distribution of aid to those who are most in need. These are crucial preconditions for the delivery of principled humanitarian aid.

Mr. President, the humanitarian needs in Idlib are among the highest in the country. Three million civilians remain trapped between the Syrian army and the Turkish border. On the basis of the information provided by OCHA it is clear that cross-border assistance is an indispensable lifeline for civilians living in Idlib. In September 620.000 people received food aid from Turkey through this mechanism.

The message from this Council should be clear: it is a matter of life and death to prolong this humanitarian channel before the end of the year. There is no alternative for cross border aid if we want civilians in Idlib to survive.

Mr. President, we are concerned to hear from Mr. Lowcock that the convoy has not yet reached Rukban. The situation for the 45.000 people in this camp on the Syrian-Jordanian border is desperate. A long term solution for these people is long overdue.

We call on involved parties to search for solutions, taking the dignity of those trapped there into account.

2. The need for sustained de-escalation in Idlib and respect for International Humanitarian Law

Mr. President, this brings me to my second point: the need for sustained de-escalation in Idlib and the need for respect for International Humanitarian Law.

We welcome the decrease of violence in and around Idlib since the conclusion of the MoU between Turkey and Russia. It has reduced the immediate risk of a humanitarian catastrophe and it has brought the people of Idlib a moment of respite.

It remains essential to prevent an all-out military offensive in Idlib. We call on all parties to translate the decrease of violence in Idlib into a sustainable ceasefire that should lead to a negotiated solution for Idlib.

Respect for international humanitarian law is an obligation for all parties to the conflict in Syria. This includes protection of civilians and facilitating principled humanitarian action. Civilians need to be able to leave Idlib freely, if they want to do so out of their own free will.

Responsibility for any attack now falls fully with the Syrian regime and its allies supporting them from the air. Those responsible will be held to account.

3. Support for a UN-led political process.

Peace and stability in Syria can only be found through a political solution that is inclusive to all Syrians. Therefore, the Kingdom of the Netherlands strongly disagrees with the premature calls for reconstruction aid and for the return of refugees.

There will be no reconstruction aid from the EU for Syria until a comprehensive, irreversible, credible and inclusive political transition is firmly under way. This political transition should be negotiated by the Syrian parties in the conflict on the basis of UN Security Council Resolution 2254 and the 2012 Geneva Communiqué. And we see the role of the United Nations, especially of Staffan de Mistura and his successor, as crucial in this context.

Mr. President, I would again like to draw your attention to a by eminent jurists setting out clear standards for reconstruction aid in Syria. And they gave us their legal opinion on the 24th of September and I quote:

“without adherence to these standards, the provision of reconstruction assistance can facilitate past, continuous, or new violations of international law, which would in turn give rise to complicity or shared international responsibility”.

Let me also underline that any transition requires accountability for acts committed during the conflict. This was also specified in the 2012 Geneva Communique.

In order to achieve sustainable peace, those suspected of having perpetrated war crimes and crimes against humanity in Syria must be held to account. And if this Council remains blocked by the veto for referral to the ICC, we will continue our accountability efforts elsewhere.

Syria currently is not ready for safe, voluntary and dignified return of refugees. Return can only be facilitated when the protection thresholds are in place, and involvement of UNHCR is crucial to monitor the protection of Syrian civilians.

In conclusion, Mr. President, we fully support the 5 asks as presented by Mr. Lowcock just now. We need to see rapid and meaningful improvements in humanitarian access in all of Syria.

Cross-border aid remains essential for reaching those civilians in Idlib, many of whom are IDPs, that depend on humanitarian aid for their survival. We underline the points made by our French colleague on the need for sustainable and political solution.

Meanwhile, let us make sure that the UN can relieve the needs of the civilians in Syria who have suffered tremendously for so long already. 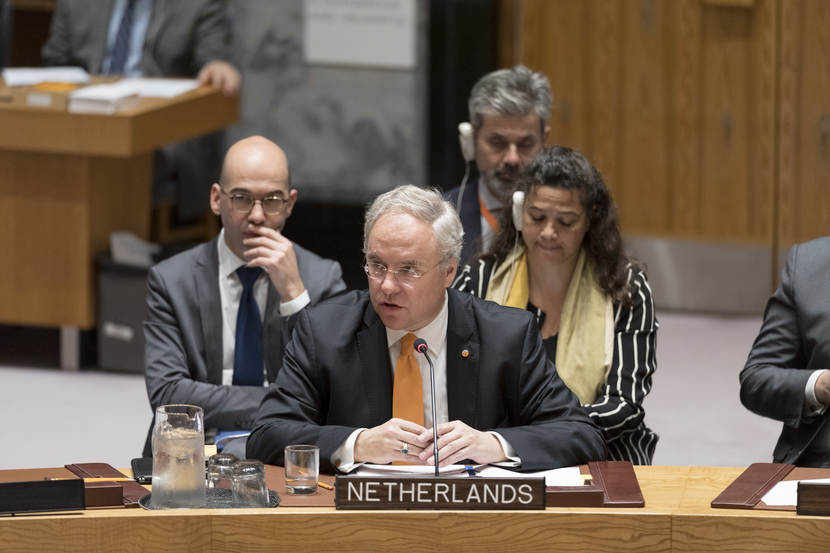