In line with UNGA resolution 68/262, adopted in the General Assembly with an overwhelming majority on 27 March 2014, let me reiterate our full support to the independence, sovereignty and territorial integrity of Ukraine within its internationally recognized borders.

Let me be clear, we will not accept the redrawing of borders in Europe with the use of military force by Russia. These actions are in direct contravention of international law and in violation of the charter of the United Nations.

Mr. President, I will focus on three issues:

Mr. President, my first point concerns the announcement of local elections in the non-government controlled areas in the East of Ukraine. We condemn these illegitimate so-called elections. If held, these fake elections would contravene commitments made under the Minsk agreements and would violate Ukrainian law.

In line with the Minsk Agreements, local elections in certain areas of Donetsk and Luhansk can only take place in accordance with Ukrainian legislation. Any such illegal elections would be incompatible with the sovereignty and territorial integrity of Ukraine.

In this regard these so-called elections are not only illegitimate, but also counter the letter, the spirit and the commitment under the Minsk Agreements. They are a clear setback in the peace process.

The Minsk Agreements remain the only viable and accepted path to peace. The Kingdom of the Netherlands calls on the parties involved to refrain from any actions that obstruct the implementation of these agreements, including the holding of so-called elections.

We call on Russia to bring its considerable influence to bear to stop the so-called elections from taking place. This is in the interest of the peace process and of the civilians, who suffer the daily consequences of this conflict.

Russia must play its part by ending its financial and military support to the separatists and by withdrawing its armed forces and military equipment from Ukrainian territory.

Mr. President, my second point pertains to the humanitarian situation in the non-government controlled areas. Tireless efforts have been made by the OSCE Special Monitoring Mission to keep all parties respecting the Minsk agreements, including the ceasefire and withdrawal of heavy weapons. We commend the courageous work of the OSCE Special Monitoring Mission in often dangerous circumstances.

The population in the affected areas continues to suffer. In its latest report, OHCHR recorded a 30 per cent increase in civilian casualties compared to the previous reporting period.

Both landmines and unexploded ordnance remain an everyday threat to civilians in the conflict area. The civilian infrastructure has been heavily damaged. Power and water supplies are insecure.

In a Presidential Statement on June 6, this Council requested UN agencies to address the humanitarian situation in the east of Ukraine.

The Kingdom of the Netherlands calls on all parties to ensure that UN and international humanitarian organizations can be fully operational in the non-government controlled areas. And as Mrs. Mueller said, civilians are not a target.

3. The security situation in the broader Black Sea region

Mr. President, my third point centers on the security situation in the broader Black Sea region in the wake of the illegal annexation and militarization of the Crimean peninsula by the Russian Federation.

Recently, we’ve seen that Russian military presence has increased in the Sea of Azov. A militarization of the Sea of Azov can only destabilize the delicate security situation in the wider Black Sea region.

Simultaneously, the Russian Federation has started inspecting commercial vessels in the Sea of Azov heading to and from Ukrainian ports. The resulting lengthy delays only add to the economic damage inflicted on south-east Ukraine by the illegally constructed Kerch bridge.

The Kingdom of the Netherlands welcomes Ukraine’s decision to seek arbitration under the United Nations Convention on the Law of the Sea. We hope for a peaceful settlement of the dispute.

In the meantime we call on all parties to take all necessary measures to de-escalate military tensions in the Sea of Azov. 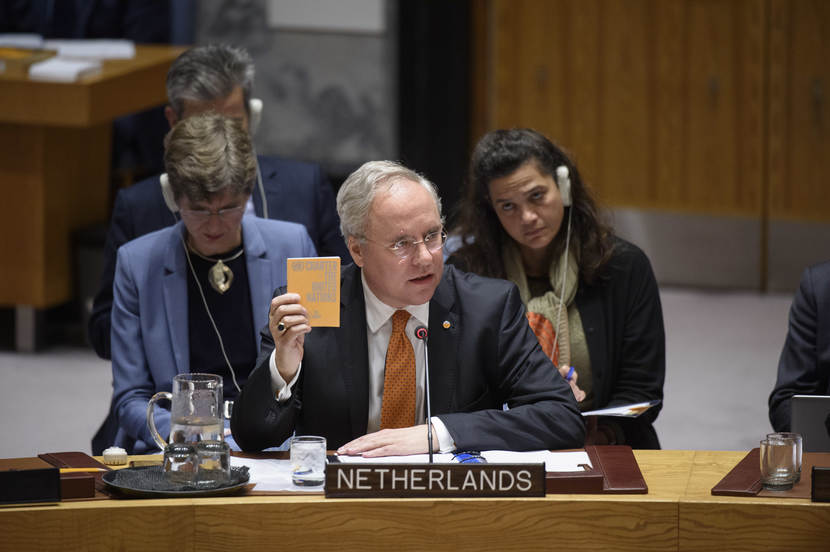