Statement by His Excellency Mr. Stef Blok,
Minister of Foreign Affairs of the Kingdom of the Netherlands 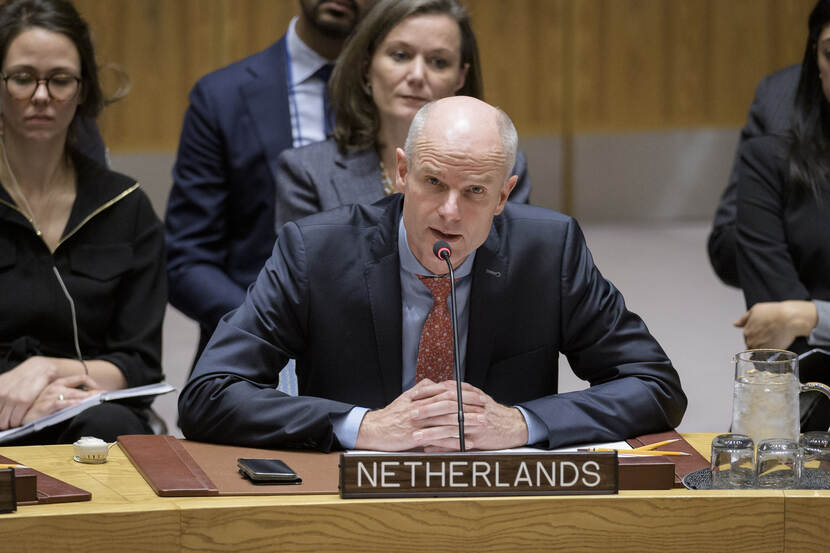 I’d like to thank Mr Lowcock for his sobering briefing.

Last March, I had the honour to speak in this Chamber for the first time. The same topic was on the agenda: the humanitarian crisis in Syria. I’m addressing you today in the knowledge that this situation will remain on the agenda for the foreseeable future. Millions of Syrians continue to suffer.

Back in March, the Syrian regime and their allies were bombing civilians in Eastern Ghouta. Delivery of humanitarian aid was obstructed. Long-established norms of international humanitarian law were gravely violated.

Today, nine months later, the air strikes on Eastern Ghouta have stopped. But we all know this hasn’t meant an end to the horror for the Syrians. Humanitarian workers continue to have very limited access. Many refugees and IDPs cannot go back; they fear for their safety. UNHCR conditions for a safe return have not been met.

After years of terror and starvation, children, women and men in former opposition-held territory still lack access to food, to medical care, to schooling. Access to these basic necessities is being blocked.

What’s more: these people now live in fear of retribution, persecution and detention by Assad’s security services. There is a complete lack of security.

After 7 years of war, more than 6 million Syrians are internally displaced, including the incredible figure of 2.5 million children.

After 7 years of war, these people should be free to choose to go back to their homes. Instead they are faced with discriminatory legislation, undermining their housing, land and property rights.

After 7 years of war, countless Syrians have had no news of the whereabouts of their loved ones. Is there still hope?

Or were their family members, neighbours and friends arrested, detained and tortured or even killed in regime-run prisons?

Mr President, we have held a seat on the Security Council for one year.

Many times, the situation in Syria has been on the agenda. Many times, progress has been blocked by the lack of implementation of Security Resolutions.

For how many more years will Syria remain on the agenda of the Security Council?

For how many more years will Syria remain on the agenda of the Security Council?

For how many more years should we allow the Syrian regime’s systematic human rights abuse and institutionalised violence to continue?

It is clear that this situation must not be allowed to continue. Syrians are in dire need of progress. Four points I’d like to make:

Let me also underline that the EU will not begin development and reconstruction efforts before a comprehensive, genuine and inclusive political transition is firmly under way. For my government it is inconceivable to finance a regime responsible for crimes against humanity and war crimes.

Let me say something about those crimes. Some of the darkest crimes of modern times have taken place during the Syrian conflict. And they are still taking place.

There will be no stability until the perpetrators of these crimes are brought to justice.

To me it’s clear:
Accountability is about upholding our human dignity.

But what we see is impunity becoming the new normal. This must end. We must not allow this immense human tragedy to become a travesty of international law. It would be a terrible crisis of credibility for the international community

So: the perpetrators of shocking crimes, including ISIS and Al Qaida, will be found.

I urge all states to increase their support for the International, Impartial and Independent Mechanism. Its aim is simple and clear: to ensure that information about serious crimes is collected, analysed and preserved for future criminal proceedings. I again call on all Council members to refer the situation in Syria to the International Criminal Court.

Finally, ISIS’ fighters have committed gruesome crimes that, in the case of the crimes against Yazidis, may amount to genocide. I call on all members of this Council to work together to achieve recognition by this Council of these grave crimes, including genocide. So we can make sure these heinous crimes will not be repeated.

The Netherlands will soon end its term on the Security Council. If I may, Mr. President, on a more personal note: it has been an honour to speak on behalf of my country, in this chair, in this chamber. I know – discussions, debates and decisions in this Council are not always easy. This is no reason for despair. Because, as a wise author, Tolstoi, wrote, some time ago: For every situation, no matter how difficult, there is a solution; it comes down to making a decision.