UN Youth representative to cycle from Amsterdam to Cape Town

Foreign minister Bert Koenders  met Dutch UN Youth Representative Jilt van Schayik this morning ahead of his forthcoming bicycle trip to Cape Town. Next week, accompanied by team-mate Teun Meulepas, co-founder of the ‘Building Bridges’ foundation, Van Schayik will set off to cycle from Amsterdam across the continents of Europe and Africa. Along the way, the two will talk to young people about the post-2015 development agenda and how to make it happen.

Van Schayik believes there is a gap between international policymakers and the everyday lives of young people at grassroots level. In his view, the post-2015 development agenda is too far removed from everyday experience. ‘The aim of this ambitious project is to connect young people, share our stories and inspire one another to make a difference in this world. We want to give young people a voice,’ he said.

Mr Koenders is supporting the project and will be following the progress of Van Schayik and Meulepas. ‘The stories and experiences collected by the UN Youth Representative on this trip are significant to international policymakers,’ he said. ‘Young people need to be heard too.’

Van Schayik and Meulepas will cycle through 20 different countries, each of which has national projects organised by and for young people. Van Schayik commented, ‘It’s a way for young people to get together to share their dreams for the future and inspire each other to action.’ 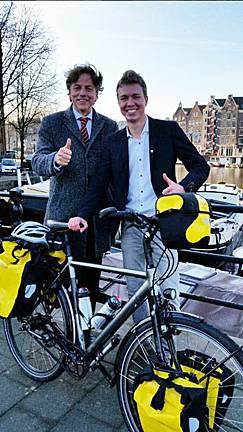