UNESCO has three governing bodies: the General Conference, the Executive Board and the Secretariat.

The Secretariat handles the daily operational and administrative tasks. Its head is the Director-General (DG), whom is elected for a term of four years with the possibility of reelection for another four years. The DG is supported by the Deputy DG, eight Assistant Director-Generals and their staff members. Currently Ms Irina Bokova of Bulgaria is UNESCO’s DG, whom was elected during the 34th General Conference (GC) in 2009 and reelected in November 2013 during the 37th GC. Tasks of the DG include proposing a biennial working plan with a budgetary framework, periodic reports on the activities and results of UNESCO’s programmes, and staff management.

The office of the DG coordinates the activities of the CG, the Executive Board, the Office of International Standards and Legal Affairs (LA) and the Internal Oversight Service (IOS). Then there are offices that are charged with governance of the Organisation, such as the Bureau of Human Resources Management (HRM) and the Office of Public Information (OPI). The Bureau of Strategic Planning (BSP) works on future policies. The five Major Programmes of UNESCO are steered by this organisational structure. 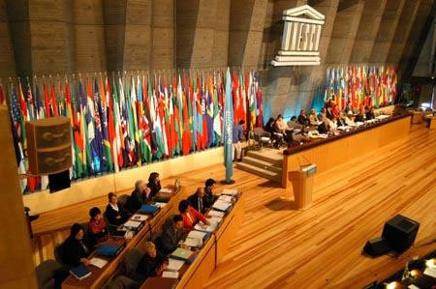 The General Conference is the highest governing body of UNESCO. All member states gather once every two years to sometimes alter and thereafter approve the proposed working plan and budget for the next two years, as well as the Mid-Term Strategy for the next six years. All 195 member states have one voice, impersonalised by their ambassadors. The GC also elects the DG and 58 members for the Executive Board (EB). If necessary, the CG can authorise the EB to establish certain research committees.

The 58 member states of the Executive Board are elected through the system of electoral groups, a common system within the United Nations framework. This means that member states are clustered by region. Tasks of the EB comprise supervising the Organisation’s programmes and budget; first, the DG plans activities that the EB subsequently has to approve.

The Executive Board has five permanent subsidiary bodies:

4.    Committee on Conventions and Recommendations (CR);

Since the Netherlands was elected in the EB in November 2013, it is also a member of the PX and FA. In general the goal is to reach consensus in the process of decision making. However, if this appears to be impossible, the items can be discussed at the plenary sessions of the EB, which often leads to voting.